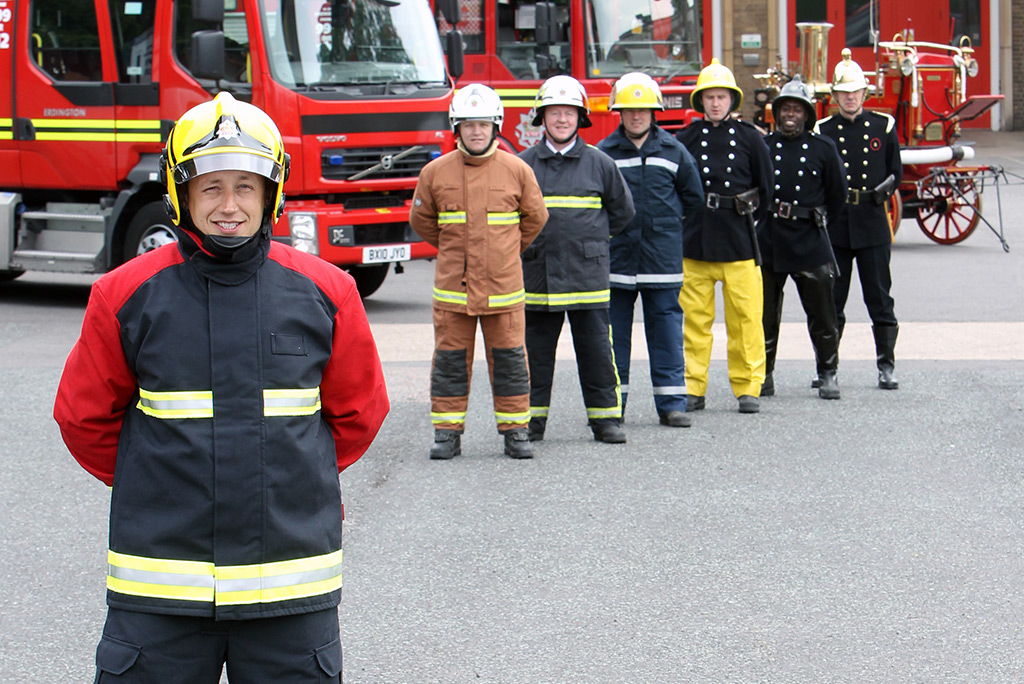 Leading British textile manufacturer Hainsworth’s innovative fabrics help to protect hundreds of thousands of firefighters worldwide. Managing Director Tom Hainsworth reflects on some of the advances made in PPE as we approach the 25th anniversary of the King’s Cross disaster.

The structural firefighter’s personal protective equipment (PPE) has evolved enormously during the past 25 years.

This is due to a number of factors including the fall-out from major incidents such as the King’s Cross fire of 1987, the changing role of the firefighter and, of course, the improved technologies and textiles available to the fire service today.

It is remarkable to think that this November marks the 25th anniversary of the appalling fire at King’s Cross station which ultimately cost the lives of 31 people including fireman Colin Townsley.

This tragedy brought about a wholesale review of the PPE worn by firefighters in the UK who, until this time, were still arriving at emergencies wearing heavy woollen tunics.

With the publication of the EU Directive on PPE in 1989, the PPE market in the EU was opened and harmonised and gave rise to the creation of European Standards . This led to the introduction of European Standard EN 469 “Protective Clothing for Firefighters” which enshrined in law the need for garments to undergo a number of tests to ensure they provided adequate protection against both radiant and convective heat. In addition, they must also meet the requirements for resistance against water penetration and tearing.

Another major change during the past 25 years has been the nature of the work undertaken by firefighters. Firefighters now attend far fewer fires and a far greater number of RTAs, while there is also a much greater fire prevention agenda than ever before with fire service personnel actively involved in their respective communities. Add into this mix the growth during the past 25 years of the chemical and nuclear industry, bigger buildings and the heightened threat posed by terrorism and you can see how the modern firefighter operates in a very different world to the one faced by their predecessors a quarter of a century ago.

A recent presentation for the Future Firefighting & Rescue Research Partnership, prepared by Steve McGuirk, Greater Manchester Fire and Rescue Service’s Chief Fire Officer and Chief Executive, stated: “The modern fire and rescue service attends a diverse range of incidents and situations. In examining our firefighting strategies, and engaging new technologies, it is appropriate that the protection we wear reflects the changes to operational procedures and practices. For example, this could include the integration of thermal imaging technology into fire helmets and different PPE for low risk activities such as rural or wildlife firefighting.”

While there continues to be this ongoing shift towards a more diverse role for the modern firefighter, PPE must also continue to provide the best possible standards of protection when firefighters are called out to a major fire incident.

It means that for a textile manufacturer like Hainsworth and its partners, one of the biggest challenges is to ensure that we strike the right balance between comfort and protection. For example, while the thickness of the firefighter’s kit has decreased, the ability to sense the temperature of a fire is greater than ever.

The development of TI-technologyTM by Hainsworth, ten years ago was specifically about taking PPE intelligence to the next level. This led to the introduction of Hainsworth® TITAN within firefighter PPE, creating garments with increased breathability for greater heat stress management, allowing firefighters to become more aware of the environment in which they were operating.

Further advances were made in this area with the introduction of EN469:2005 which placed greater emphasis on the testing for heat stress and moisture management.

George Farenden, Emergency Response Consultant for DuPont and himself a former firefighter with the West Midlands Fire Service, says: “Heat stress is a big issue for firefighters because it can affect their cognitive processes. Often, firefighters don’t realise that their ability to make the right decisions is being affected.

“There are so many important factors to be considered in the manufacturing of today’s PPE including good design, sweat management systems and breathability. Very often, firefighters will be sweating before they even reach the fire compartment.”

George Farenden adds: “You can no longer get firefighter kit off the peg – the requirement of a firefighter in London is very different to one in the Scottish Highlands.”

A holistic approach to PPE is therefore critical in today’s constantly evolving world, an approach which places equal emphasis on design, protection and quality, taking fully into account the vast and complex array of duties which our firefighters are expected to perform.

This is a trend which is increasingly being followed by fire services across the globe, something Hainsworth has observed at first hand in Europe, the United States, Australia and the Middle East, where the Hainsworth® TITAN fabric is in growing demand.

Meanwhile, the Hainsworth Innovation Centre continues to work closely with its industry partners as well as firefighters both in the UK and internationally, challenging traditional assumptions and looking at future advances in PPE technology.

These future advances will be about further determining the balance between thermal and physiological performance of PPE and may include 3D structure, intelligent use of fibres and heat sensors located in turnout gear.

Further research is also being done around the layering of kit – and the potential to take off or add layers to meet different requirements. An extension of this could even involve providing firefighters with two different kits.

Steve McGuirk summed up current thinking in his recent presentation when he stated: “Our firefighters rely heavily on their equipment and PPE, underpinned by robust operational procedures and techniques, to ensure they remain safe in a perilous environment.

“By investing in new research around technologies and equipment, and amending operational processes and tactics, we can work to ensure we achieve a marriage between new technologies and procedures.

“This will allow us to achieve the ultimate goal of making the firefighting environment less hazardous, save lives as well as reduce economic loss, damage and environmental impact.”